This afternoon I needed to run in to town and return a few movies at Red Box, put a few Netflix at the post office (what can I say, we've had a sick kid laying on the couch being bored) and get a little mental health hour or two to myself. A trip to Target and the grocery store was just what was needed, ran into an ooooooold friend and gabbed in the grocery store for about an hour and then it was back to sick duty for me. Actually, it wasn't sick duty because the Sicko stayed at his Gram's while I went to town and I went there after and we stayed for dinner. (I caught a little nap in her recliner too ;-)

Anyway, on my way home, almost home actually I caught this weird looking thing out of the corner of my eye. I thought it was a dead animal or stuffed animal or something on the snowbank. After I got way past it I decided to stop and check it out, so I backed up about 100 feet....and this was what I saw.

Well, not really but what I saw I thought was a dead animal. And then the branches in it's mouth were moving...and then I realized that it was a live beaver. By the time I got my camera out to take his picture this was all I could get.

I thought he was kinda cute, click on the picture so you can see the texture on his tail. 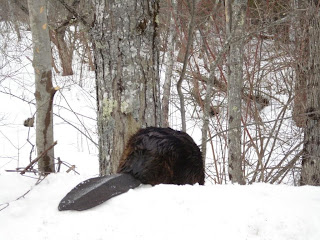 Well, that's all, just wanted to share my wildlife picture with you! (I had something else typed there but decided it wasn't appropriate, snicker snicker tee hee.)
Posted by Catherine at 8:15 PM