I talked about making these cupcake Bites from Bakeralla on Monday for my Little V's Valentine party tomorrow, but only IF I got all my assignments that are due on the 13th for EK done. I'm happy to say that I got EVERYTHING done, including the bites.

If you click on the link in the previous post to read Bakerella's recipe, it calls for peanut butter cup type candy molds - I looked everywhere in my town last week and over the weekend for them and no one had them. bummer. But, I ended up improvising! And they turned out ok, NOT perfect by any means, but they look cute, and how long do you think a bunch of 9-10 year olds are going to look at them and pick them apart and contemplate whether I had a mold or not???? THEY aren't!! One of the other issues I had is, I don't have a microwave so I had to use a double boiler to heat up the chocolate and I think I got the pink to hot...because when I dipped the cupcakes into the pink for the frosting some of the chocolate ended up melting. Oh well, it all goes to the same place and tastes the same too!

So, you want to know how I improvised without a candy mold? I followed her recipe exactly, except instead of pouring the chocolate into a candy mold I poured it into mini-cupcake liners that were in a mini-cupcake pan. When the chocolate had set completely, I tore the liners off and moved onto the next step!

These were actually pretty easy, and I think they're going to be tasty too. 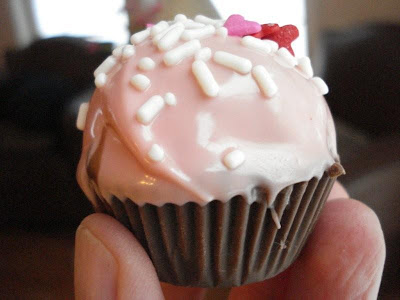 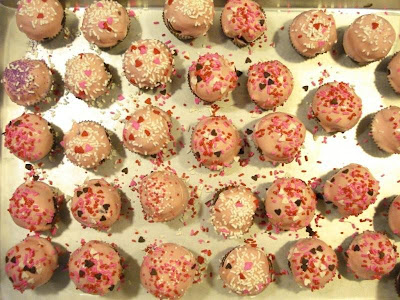 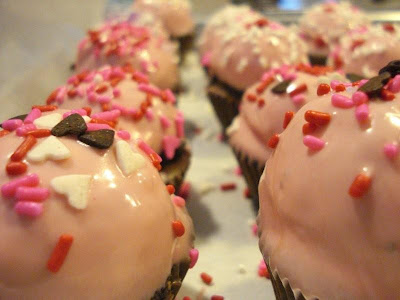 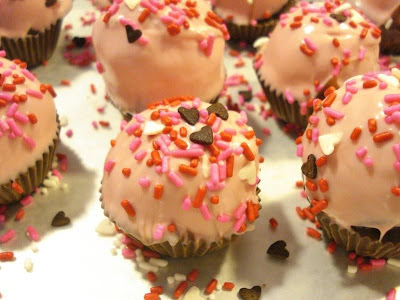 Have a great day everyone, and go make some cupcake bites!
Posted by Catherine at 4:18 PM