A lot of people are posting things from their archives, and I thought it would be fun to do that too -- but I'm going to put a little twist on it and post content that I have posted in previous years that, when possible falls on the same day or even in the month that we are currently in.

When I looked back to April 29, 2008 what I had to share wasn't to exciting -- but I liked this one. I was just starting to get interested in posting my work in challenges run by other artists, this might have been my first one.

It also looks like I was still scrapbooking in 2008, something I haven't done in I don't know when. I can see a transformation of my style towards mixed media. While it does seem that I was happier then -- and skinnier with less grey hair -- for the most part things haven't changed! Still collecting junk and making stuff with it.

The journaling says something about creating art being my Golden State, I can certainly attest to that. I'm more into art than crafts these days. 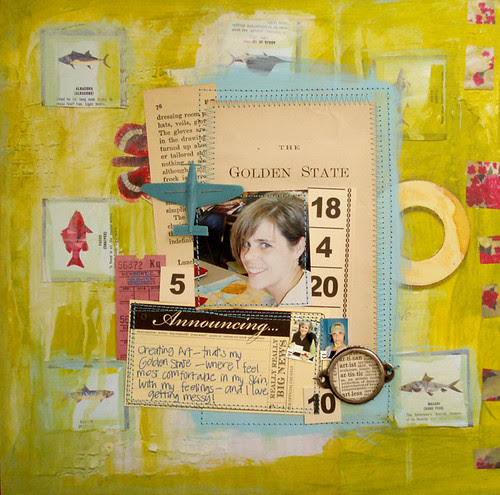 I've been enjoying reading the Journal Revolution blog lately, that Linda Woods is hysterical - if you haven't visited, you must. Yesterday she posted a challenge for the members of Tally Scrapper to do a journal page and include a picture of yourself.

I'm not a member of Tally Scrapper and don't feel like joining another community and feeling my way around. so I just played along and posted it here and at 2PS, I was happy to see that I actually got some comments for a change over there too, that was a pleasant surprise because I usually don't get much for comments. Anyway, this page was a continuation of my Golden State challenge that I came up with for myself, only it's a scrapbook page and not an ATC...but I used something from the book....so in my eyes it still qualifies as meeting my rather LOOSE requirements! LOL.

anywhoo, this did take all of a half an hour. No laboring over elements and placement and straightness, and visual triangles and journaling or exact mat sizes and catalog numbers and writing instructions and signing photo releases. Just me, some paint, some scissors, some good vintage stuff and putting it all together to make this. {I DID NOT USE MY PAPER TRIMMER TO MAKE THIS PAGE, and it felt great!!}
I don't have any more of those airplanes and I'm bummed! Isn't that Daisy D's patterned paper just the best?