Who Made You WHO you are Today?

I often stop and think about the people that influenced who I turned out to be, do you? I think everyone that we encounter during our life molds us in some way - whether it be a bad way or a good way.... these people aren't family members - they are the ones we meet along the way....
For example, there's Mrs. Starr...she was my 3rd grade teacher (I think - maybe it was 2nd grade or maybe it was 4th grade....) I remember that she had long hair and it was braided often times and as I think of her now, she reminded me of an American Indian. Strong features...and I think she lived on a farm.... she was an artist, but wasn't my art teacher. I remember she drew a sketch of me and as she was drawing she told me my eyes were shaped like almonds. I always wanted to draw like her. She is part of the reason I am an artist today...
And then there was Mrs. Dancause. She was my Graphic Design professor/mentor in college. She believed in me as an artist, and as a designer. I often think I'd like to go back and look her up....I think someone told me she had a glass eye, I always think of that when I think of her. She was talented, and taught me so much about design.
And then there was Jack Knizeski. He was the boss at my PERFECT job, before he had Maine Scientific. The job most people never have. The dream job. The job I couldn't wait to get to work to everyday. The funny guy, the fun job. He understood my funniness. We had lotsa good times there! My career will always be compared to the 5 or 6 years that I worked there, and so far - none have lived up!
There was Fred Haer....I worked for him at FHC, Inc. he was a tough guy to work for, a really TOUGH guy - but as I think back on my years in his employ as the International Marketing Coordinator (or whatever it was I did for him) he saw excellance in me as well. I think he knew that I was talented, and pushed me to work harder...and longer...and to think THINK, really THINK about excellance. And he demanded excellance. I must have been excellant if I worked for him that long. He still uses some of the things I designed when I worked for him...
And then there's Rebecca Sower. As sweet and kind as she is talented. She chose the first scrapbook page I ever had published for Creating Keepsakes. I was her assistant at a CKU in Boston, MA in 2004. She is a Creative Alliance for EK Success ...so I have had several opportunities to chat with her during my stint as a CReative Artist Team Member for EK. Her words and art are an inspiration to many.... her first book was what made me WANT to share my art.
And then there is Joe Scanlon. My one true love. The one that believes in me MORE than I believe in myself. The one that makes me crazy with his freaky ways. :-) The one that says, you Catherine, gotta patent that for every crazy wacky idea that I have.... thanks dude. love ya. 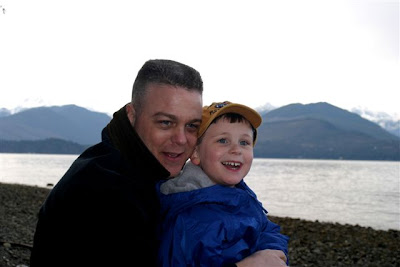 There are so many more that I can't think of right at this very moment...that have touched and affected my life....thanks to you all! Have you thought about who touched your life lately?
Posted by Catherine at 11:36 AM