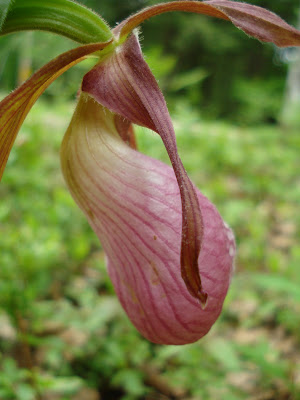 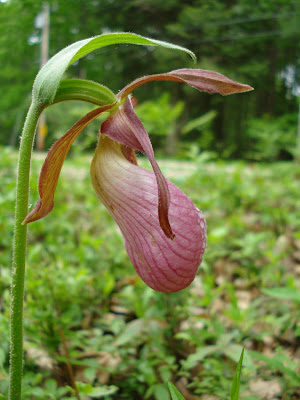 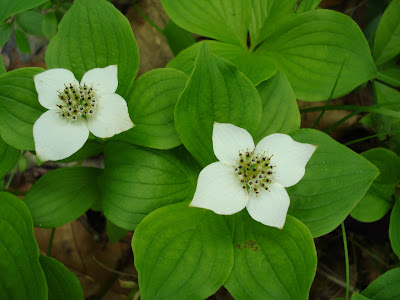 Over the last couple of days I've discovered several (a total of 6 I think) pink and ONE white lady slipper growing in our family compound (i mean neighborhood, ha) . We've always known they were protected - but that never really stopped me from picking them as a kid. (shame on me, but I was just a kid....picking pretty flowers for my Mom....I didn't really know what protected meant at the time!!)
I haven't seen ANY of these beauties in the neighborhood in a long time, and I certainly never thought to take pictures of them either. I love these flowers, LOVE LOVE LOVE them. I think because it means summer is almost here. The bottom picture is a plant called a bunchberry, I think. After it blooms it gets some funky berries. Don't eat 'em if you see 'em.
If you see any of these lovelies in your neighborhood - remember they are a disappearing natural wonder - so don't pick them.
Learn more about the Lady Slipper from WikiPedia: Lady Slippers is a term used to describe the orchids in the subfamily Cypripedioidea, which includes the genera Cypripedium, Mexipedium, Paphiopedilum, Phragmipedium and Selenipedium, distinguished by their slipper-shaped pouches (modified labellums), which function by trapping insects so that they are forced to climb up past the staminode, behind which they collect or deposit pollinia. This subfamily has been considered by some (Rasmussen, 1985) to be a family Cypripediaceae, separate from the Orchidaceae. Lady's slipper orchid (Cypripedium calceolus) The subfamily Cypripedioideae is monophyletic and consists of five genera. Their common features are two fertile diandrous (that is, with two perfect stamens) anthers, a shield-shaped staminode and a saccate (sac-shaped) lip.
Posted by Catherine at 11:27 AM