I've been thinking about snowflake ornaments ever since I went to my art group a couple Sundays ago. I saw a pretty one here, and she was kind enough to share where she purchased her large snowflakes from. Even though I ran right out and got some, I didn't end up using them on the ones I made the last couple of days.

I think the layered, different colors and textures really look nice, it gives the flake lots of weight and substance. The beaded wire really adds a lot of prettiness to them too. I realized though, after I was done - that I need to spray the backs of them. The bazzill snowflakes I used as the base are chipboard color on the backside. 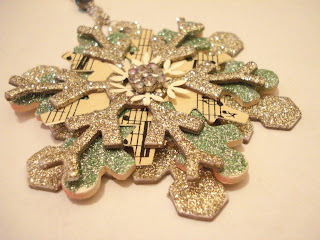 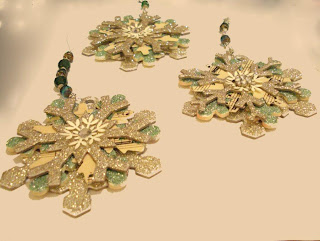 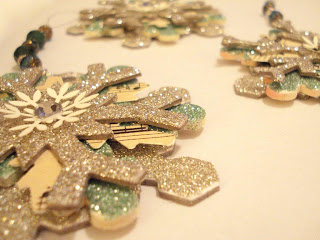 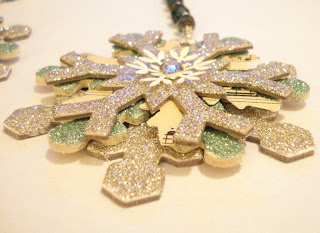 To make them I had two sizes of Bazzill Snowflake chipboard, green and silver glitter, one wooden snowflake from Joann's, two snowflake punches from EK Success - one extra large and one small - I think a Martha Stewart one, beading wire and beads, a long brad - one of them was decorative and a couple pieces of bling - oh and some vintage music paper and cream chipboard.

So, I just had an idea pop into my head on a fun way to use them altogether - hoping to do that soon.....when I've got a lot of other projects completed!

Thanks for stopping by, and have a great DAY!

Posted by Catherine at 9:59 PM

All photos. ©2005 - 2020 : Catherine Matthews-Scanlon / Catherine Scanlon Designs unless stated otherwise. All rights reserved. Please do not use, copy, or reproduce the photos from this website for any reason without my express permission. THANK you!