Getting Creative during the Blizzard of 2013

Ya gotta laugh sometimes. What's the alternative? Crying? I do that too, sometimes. I have these little word stickers on my door to remind me as I leave each day to laugh. The window near my computer says create. The mirror in my bathroom says smile.
Nice.
Little.
Reminders. 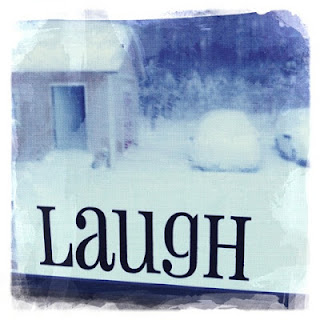 It's pretty handy to have them in clear view during blizzards. First thing in the morning. When the door to the shed is wide open and SOMEONE has wade through 2 feet of snow to go shut it before it fills full of snow. I'm thankful my husband was feeling pretty chivalrous and got up out of bed so I wouldn't have to.

By Saturday afternoon I had been lying on the couch for the 4th day -- I decided I needed to get some pictures of my tree and get out for some fresh air. Clear my lungs and refresh my constitution.... whatever that means -- something my Mother used to say when I was a kid. 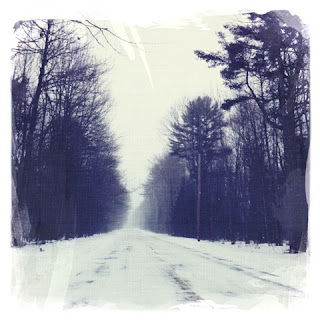 Since Mr.Chivalrous had already outdone himself to shut the shed door, make coffee + breakfast, shovel a path for the dog to pee AND clean-up the kitchen I decided that I wouldn't make him clean off the car to drive up and take pictures. That it would be a good thing to walk. It probably would have been easier to clean the snow away and drive up there, lol.

About a quarter of the way there I wondered who's crazy idea it was to walk, LoL!  That was at the end of the straight-away above! 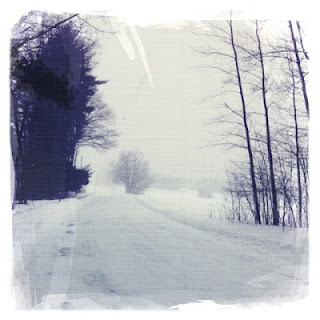 By the time we got here we were frozen, windblown but having a lot of laughs. It was fun. Walking in the heavy winds and snow. Plus, we couldn't turn back now -- I could imagine the beautiful pictures I'd get -- and I've got one big beautiful project in mind for the one great picture I took for an art show I'm having in December! 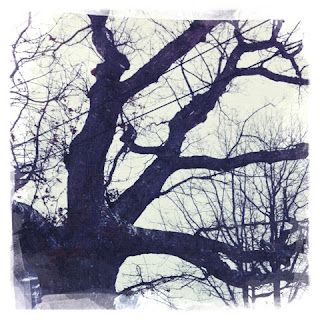 When we got to the tree we realized we had to walk INTO the wind the whole way back. LoL.
Not a good moment. 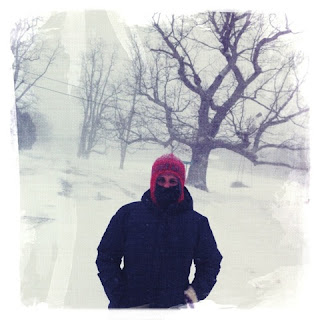 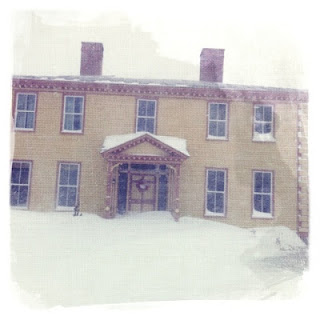 We were thankful we didn't have drifts as high as this house! 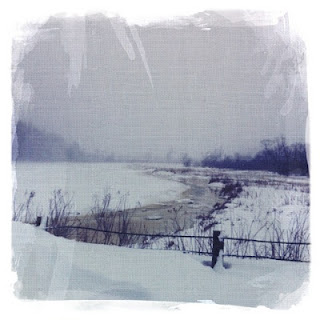 Looks like the river didn't flood either. That was a big relief too!

I love taking pictures during/after a storm -- the sky and freshly fallen snow is so beautiful and creates a very interesting moodiness that you don't normally see. So, even though I didn't CREATE much Art over the weekend I did get creative with my pictures!

Thanks for stopping by -- have a GREAT week!